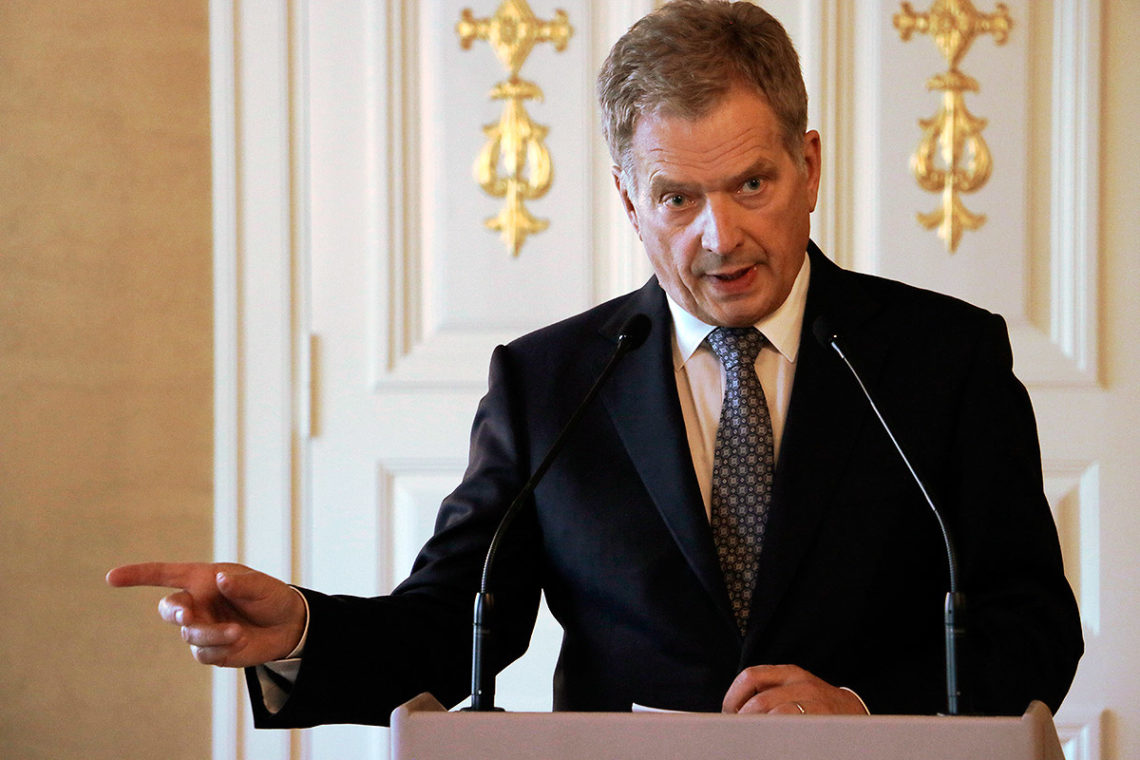 Finnish President Sauli Niinisto sees no need for deeper economic sanctions against Russia as long as the status quo holds, but also says that Finland, a European Union member but not a NATO one, does not support easing pressure on the Kremlin either.

Finland, which shares a 1,340-kilometer border with Russia, suffers from Kremlin counter-sanctions more than most other EU nations. But it stands on principle: protesting Russia’s behavior in Ukraine — seizing the Crimean peninsula, waging a bloody war against Ukraine that’s killed 13,000 — is important.

“We were the first to condemn Crimea — they took over on a Saturday, and on Sunday morning we condemned,” Niinisto said in a brief interview with the Kyiv Post on Sept. 13 on the sidelines of the Yalta European Strategy forum in Kyiv’s Mystetskyi Arsenal. “We have been very strict on sanctions, yet we have to have contacts with Russia because of our long borderline with people crossing.”

Fundamentally, “it’s important to keep what we have decided until they (Russian leaders) change something,” the Finnish president said.

At the same time, he said, “harder sanctions should have clear new reasons,” the president said. If the Kremlin escalates its war, new sanctions might be needed. But as long as the “status quo” holds, “I wouldn’t increase them now. I would want to see if the peace movement is going on first.”

He said the Sept. 7 Ukraine-Russia prisoner exchange — in which each side exchange captives — “is a minor step, but nevertheless it’s a step. Then we have to look at more steps.”

Finland fits into the theme of the YES conference this year, “Happiness Now: New Approaches for a World in Crisis.”

The Nordic nation of 5.5 million people is among the most affluent and happy in world surveys. Ukraine, by contrast is a nation that is in need of happiness — it ranks 133rd in the recent World Happiness Index among nations — and is one of the poorest countries in Europe.

Among the reasons for such wealth and happiness in Finland are at least two factors, Niinisto said: Trust and social welfare, or taking care of each other.

“Basically we have a welfare society,” he said. “As an unwritten agreement between the state, or public power, and people, citizens have an obligation to do what is possible for them, to do what they can. If they are not able, the unwritten guarantee is that we will help you. It’s a question of trust, really.”

He said Finns believe that people not “only have rights,”but they “have duties” as well, to take care of themselves and their families and respect others’ rights.

As a former finance minister, he said he’s well aware that a nation with high government benefits is very expensive. Some questioned whether Finland could afford its cradle-to-grave care, but he said “wave have maintained it. But surely that means high taxes like we have.”

As long as the public is satisfied “that the money collected by taxes is used correctly,” they mahy not be happy, “but they still pay their taxes.”

Finland actually fought a bloody war with Russia — the Winter War of 1939-1940 — in which the Finns were able to prevail against a Soviet invasion.

At least 26,000 Finns were killed and another 44,000 wounded. Soviet casualties were much higher. Finland lost territory to Stalin’s Soviet Union that it has never recovered, but kept its independence. Finns won respect all over the world.

The Finns’ willingness to fight for their nation may be one reason why Finland has had generally good relations with its Russian neighbor — with whom it shares a 1,340-kilometer border — since then.

The war and its sacrifices live on in the memory of the Finnish people, which continues to conscript citizens for army service.

Finland, while not in NATO, also invests heavily in its military. In the past, it has made major purchases of the U.S.-made F/A-18 Hornet combat jet. “It was weapon No. 1 in the world,” he said.

“It’s very clear to Russia who we are and where belong, Niniisto said “We had war, we survived, but later on from the 1940s to 1970s there was interference for example, my party was not accepted to government until the 1980s. Why? Because the Russians or Soviets didn’t like us, it was that simple.”

That said, Finns — while supporting EU membership — aren’t in favor of joining NATO, he said, at least at this time.

“If you want to become a member of something you have to be sure people want to,” he said. “In Finland, the opinion is not pro-NATO…we have said that we keep the door open. We don’t exclude ourselves from making an application.”

He also says that Finland has a lot of bilateral military ties, including “quite a lot of links with the U.S. on the military side. We are not passive in our security.”