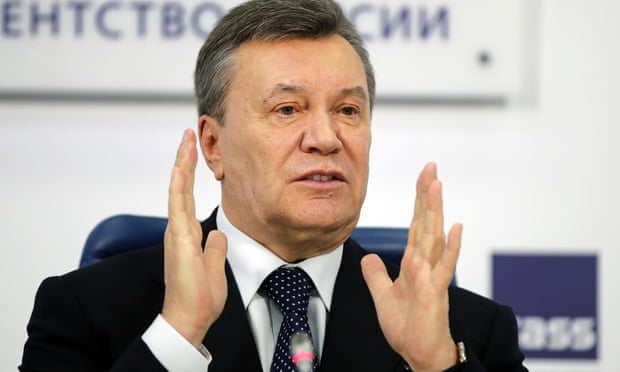 A Ukrainian court has found the former president Viktor Yanukovych guilty of treason for his efforts to crush the 2014 pro-western demonstrations that eventually toppled his government.

Yanukovych was also charged with asking Vladimir Putin to send Russian troops to invade Ukraine after he had fled the country.

The verdict came almost five years after Yanukovych was overthrown, and could serve as an important symbolic conclusion to the events of 2014. More than 100 people were killed, many by sniper fire, on Kiev’s Maidan Square in clashes between protesters and police.

The charges will have little real effect on Yanukovych, 68, who has lived in exile in the Russian city of Rostov since fleeing Ukraine under armed guard nearly five years ago.

A panel of three judges in Kiev’s Obolon district court on Thursday sentenced Yanukovych to 13 years in prison. He was found guilty of “a crime against the foundation of Ukraine’s national security”, according to RFE/RL. He was also found guilty of committing “a crime against peace, namely aiding in the conduct of an aggressive war”, the judge, Vladyslav Devyatko, said.

Yanukovych’s prison term would begin “the moment he is detained”, Devyatko added.

The events of 2014 presaged some of the most troubling years for Ukraine since the fall of the Soviet Union. Russia annexed Crimea months after Yanukovych fled, and Moscow has backed separatists fighting in the country’s south-east. Their main city, Donetsk, is a traditional Yanukovych stronghold.

Yanukovych was invited to testify by video link in November but failed to appear. His lawyers said he had injured his spine and his knee during a tennis match. Although Yanukovych officially lives in Rostov, he is said to spend time at a luxury residence outside Moscow.